7 Facts About Health of Drinking Water

1. Water Helps to Maximize Physical Performance If we do not stay hydrated, physical performance can suffer. This is particularly important during inten ... Water is known as the elixir of life, with good reason. Every system in your body needs it to survive.

“Water regulates our body temperature, keeps our joints lubricated, helps prevent infections and delivers nutrients to our cells,” said registered US dietitian and CNN contributor Lisa Drayer. “Additionally, our kidneys and liver work hard to get rid of toxins in our bodies, and they depend on water to do their job.” 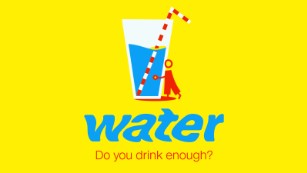 CNN Parallels: Water
Water makes up about 60% of your body’s weight, and although you can survive without food for weeks, dehydration can kill you within days or even hours, depending on the temperature and your environment.
Dehydration means more water is moving out of your body’s cells than into them. And as this happens, it’s not just water that you lose. Small amounts of electrolytes critical to cell function and energy, such as sodium and potassium, are lost along with the water.
You’re constantly losing water and electrolytes throughout the day via breath, sweat, urine and bowel movements, so even mild dehydration can exhaust you and affect many of your body’s daily functions.

Hydration and your health

You could quickly become constipated as your colon steals water from your stool to keep your digestive system moving. Urine will become darker; prolonged dehydration can also crystallize salts and minerals in urine, possibly leading to the formation of painful kidney stones. 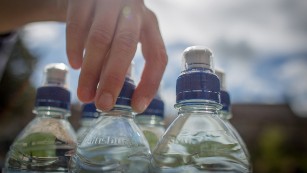 How much should you drink to stay hydrated during exercise?
Because dehydration can often be mistaken for hunger, you might gain weight as you try to satisfy your body’s needs. Fortunately, the opposite is also true if you’re hydrated.
“If you are looking to lose weight, water can help you shed pounds,” Drayer said. “Drinking a glass of water before a meal can fill you up a bit and help you eat fewer calories at a meal.”
If you suffer from migraines, studies show that a lack of fluids might easily trigger an episode. Headaches are also likely to last longer if you’re low on fluids. In addition, dehydration can leave you unable to concentrate, cause short-term memory problems and leave you feeling moody and anxious.
“When you’re well-hydrated, your sleep quality is better, your cognition is better, you function better, your mood is better, the list goes on,” said Douglas Casa, CEO of the University of Connecticut’s Korey Stringer Institute, which studies athletic performance — another area that benefits from drinking enough fluids.
“We did a study on people who were mildly dehydrated, which can happen within just 30 minutes of exercise,” Casa said, “and we found mood was compromised in both men and women.”

The signs of dehydration differ by age group. Infants and young children may not be able to recognize their need for fluids, so it’s critical to provide frequent fluid intake and keep an eye out for symptoms of dehydration: irritability or lethargy, no tears when crying, no wet diapers for as little as three hours, a dry mouth and tongue, sunken eyes and cheeks, and a shrinking of the soft spot on top of head. 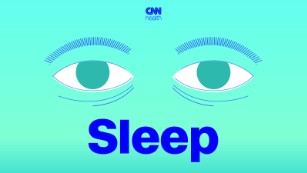 CNN Parallels: Sleep
Adults show much different signs of dehydration, including fatigue, dizziness, confusion, less-frequent urination and extreme thirst, but the latter has one exception: the elderly. Older adults may not feel thirsty but can still be dehydrated.
That’s why one of the best ways to tell whether you’re lacking fluids is by the color of your urine.
“The morning is the best time to get a global sense of your hydration status,” Casa advised. “If your urine looks more like apple juice instead of lemonade, then you’re dehydrated. On the flip side, the need to urinate throughout the day is a sign that you’re well-hydrated.”

A lack of fluids is not the only cause of dehydration. Certain blood pressure and diuretic medications can increase urination, as can diabetes that has not been diagnosed or isn’t well controlled.
A sudden and extreme episode of diarrhea or vomiting can remove a large amount of fluids in a short amount of time. Add a high fever, and you could be in trouble quickly. Upping fluid intake is critical.
Sweating due to hot, humid conditions or extreme physical activity is another sure way to become quickly dehydrated. Athletes and those who work outside have to be especially careful to avoid heat injuries including muscle cramps, heat exhaustion and seizures.
Hypovolemic shock, in which low blood volume causes a drop in oxygen and blood pressure, is the most serious form of dehydration and can be life threatening.

The many sources of water

What’s the best way to stay hydrated? Drinking plain water, of course, can’t be beat. It’s readily available and has zero calories.
But what if, like many Americans, you don’t like the taste of water? Drayer suggests adding fruit or vegetables, such as lemons, berries and orange or cucumber slices, to enhance the flavor. 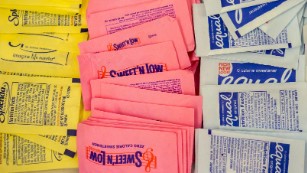 Artificial sweeteners: Where do we stand?
The National Academies of Medicine recommends a little over 11 cups (2.7 liters) of fluids a day for the average woman and almost 16 cups (3.7 liters) for men. Though that may sound difficult to achieve, the fluids can come from many sources besides water, including food.
“I often remind people that broth-based soup, as well as other beverages including tea, coffee and milk, count towards your daily fluid intake,” Drayer said. “Also vegetables including cucumbers, lettuce, celery and tomatoes and fruits including watermelon, cantaloupe and strawberries.”
“Why don’t Americans like to drink water? Because we are conditioned to expect high levels of sweetness in everything,” said renowned nutritionist Dr. Walter Willett, professor of nutrition and epidemiology at Harvard T.H. Chan School of Public Health.
“And that has led to a lot of problems,” he added. “High levels of sugar have adverse metabolic effects, and the amounts we get in beverages today is so huge that it is one of our major health issues.”
Willett, who is also a professor of medicine at Harvard Medical School, has published over 1,700 research papers and reviews on lifestyle risk factors for chronic disease.
“You might say we are malhydrated, because we drink so much soda and fruit juice and other sugar-sweetened beverages, and by that I mean we drink beverages that harm our health,” he said. “Even energy drinks and vitamin waters, most are loaded with sugar and not worth the use.”

To help people make better choices about their fluid intake, the American Society for Clinical Nutrition’s Beverage Guidance Counsel created a “pitcher” of liquids to illustrate at a glance how much of each fluid is considered best for optimal health. Though it was created in 2006, Willett, who served on the council, said the guidance holds true today.
The vast majority of your daily fluid intake should come from water. In this illustration, a person on a 2,200-calorie diet would drink about 50 fluid ounces of water a day, which is just over 6 cups (1.4 liters). Another 28 fluid ounces, which is 3.5 cups or just over 800 milliliters, could come from coffee or tea.
“There are health benefits to coffee. Studies show it can help with diabetes and has some modest cardiovascular benefits,” Willett said. “It’s a mild antidepressant. In fact, studies show about a 50% lower risk of suicide of with three to four cups of coffee a day.
“Tea has about a third the amount of caffeine as coffee, so you’re much less likely to have sleep problems,” he added, “but we don’t see as many health benefits for tea as coffee.”
The next choice in the fluid pyramid is skim milk, also sold as 1% milk, as well as soy or other unsweetened alternatives such as almond milk. For adults who wish to add that beverage to their diet, the maximum amount per day would be two cups (almost 500 milliliters).
“Milk is really complicated area because it comes along with saturated fat,” Willett said, “and even low-fat milk is high in calories. Up to two servings a day is fine, but going beyond that is excessive.” 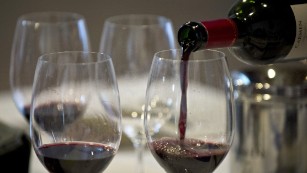 Can frequent, moderate drinking ward off diabetes?
Level four in the diagram includes diet sodas, teas and other beverages with non-calorie artificial or natural sweeteners such as aspartame, sucralose and stevia. Because there is growing evidence that these drinks might contribute to weight gain, Willett says they should be seen as an “occasional treat.” They are listed in the pitcher as no more than 16 ounces a day (2 cups or almost 500 milliliters); keep in mind that a typical can of soda is 12 ounces.
Then come alcohol, whole fat milk, sports drinks, vitamin enhanced waters and fruit and vegetable juices. Yes, even fruit and veggie drinks are capped at 4 ounces a day.
“Fruit juices are cautionary because they contain about the same amount of sugar as soda,” Willett said. “Orange juice has nutritional value, apple juice much less, so we recommend choosing orange over apple juice.”
Alcoholic beverages are complicated, he added. “There are definite protective health benefits against heart disease for both sexes, but for women, even a half a drink a day can raise the risk of breast cancer. So if you’re not at risk for heart disease, there’s no benefit in preventing it, so there’s no reason to drink,” he said. That’s why alcohol is listed on the diagram as zero fluid ounces toward your daily amount.
The last category is reserved for sugar- or high fructose corn syrup sweetened beverages such as regular soda, lemonade and fruit drinks. Willett says those get a ‘”thumbs down” because they provide no nutritional value and plenty of calories.
Join the conversation

Taken as a whole, Willett said, the pitcher recommendations should come as a wake up call for anyone looking to quench their thirst.
“The most important message is the source of the hydration,” he said. “Beverages can cause real harm. People are not dying of dehydration in America, so choosing beverages other than water and other healthy sources has major health implications.”
July 3, 2018
Read more Why do we need to drink water?